Brothers of the Serpent

Episode 33! For this esoteric and mysterious episode we return to a subject which many of you expressed interest in and wanted to know more about: Manuscript 512, that fascinating and incredibly frustrating document of the discovery of an ancient, abandoned city deep in the highlands of Brazil and the Amazonian jungle, where the descriptions of all the best pyramids have been eaten by a worm(who was later nominated for, and subsequently won, the 20th Century's Most Annoying Lifeform Ever award as well as the prestigious Most Successful Destruction of Priceless Knowlwedge Since Alexandria Burned award).


We also discuss deep ocean impacts causing 20,000ft high tidal waves, whale fossils found high in mountains, marine animals trapped in freshwater lakes at 11,000ft above sea level, anomalous fossilized homo sapien footprints in deep geological strata, and give a much more detailed look at the travesty to archaeology and egyptology that was the entire episode with the shafts and the doors and Hawass and the National Geogaphic channel.
Enjoy! (and be incredibly irritated) 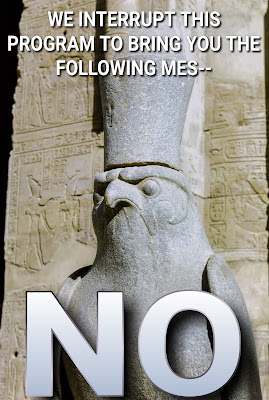 Clearly, The Falcon does not give af.
And lastly, for those of you who think it can't or won't happen to you:
Keep your ears to the ground and your eyes on the skies people.

Two brothers explore the mysteries of the ages, the ancients, and the modern day.