Brothers of the Serpent

George Howard joins us once again on the show, this time to talk about his recent trip to Egypt with Ben from UnchartedX. We talk with George about his impressions of the pyramids, the Sphinx, the Valley Temple, the Osireion, the Bent Pyramid, the unfinished obelisk, the Temple of Hathor, and of course, the Serapeum and the enigmatic stone boxes inside it. George tells us about the somewhat harrowing experience of descending over a hundred feet into a narrow shaft to see other granite boxes beneath the Giza plateau. We talk about George's overall impressions of the constructions he saw, and about the possibility of some of the objects being "precursor" artifacts, surround by later dynastic constructions.

George has posted about the trip on his excellent blog, The Cosmic Tusk.

He has also posted a collection of over 500 images from the trip.

Aside from the conversation with George, we also open a bunch of 1-up boxes (it was like Christmas in the Tangent Cube), and we read articles about the re-discovered Dixon artifact from the Great Pyramid, papers showing that Issac Newton believed the pyramid contained ancient secrets about the Earth and the apocalypse, and that the modern Venus is like ancient Earth while modern Earth is like ancient Venus. 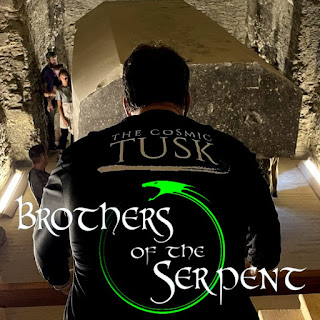 Two brothers explore the mysteries of the ages, the ancients, and the modern day.